We use cookies to ensure you get the best experience on our website. Learn More Got it!

How Many Languages Are There in the World?

Do you know that there are approximately 7102 known languages spoken around the world today? Out of these languages, 9.2% of the languages have fewer than 10 speakers and there are 46 languages that now have only a single speaker left.

These languages are distributed across countries and continents in different proportions and spoken by different nations in the world in varied dialects.

But first, let’s define what a language is.

What is a Language?

A language is basically a collection of dialects that are mutually intelligible and each of the dialects is a collection of idiolects (a single speaker’s version of the language) similar enough to be grouped together.

It is said that nearly every language uses a similar grammatical structure, even if they are not linked in vocabulary or origin. This is due to the origin of languages and the linguistic links all languages share because of geographical proximities. Conversely, those communities which are usually isolated from each other through mountains and deserts have developed multiple languages that are different from each other e.g Papua New Guinea has more than 832 different languages owing to the variations in geographical landscapes found there.

The Current Scenario of Languages in the World:

English is spoken in 101 countries. To your surprise, this number is double the number of French and three times more than Chinese. It is considered the language of global business so people around the world take great interest in learning this language. Hence English is the only language with more learners than native speakers. Do you know that English is spoken by a whopping 1-16 billion people?

Arabic is among the most popular languages in the world. Do you know, it is the official language of many Asian and African countries? Moreover, it is the predominant language of Arabic countries. These countries are rich in oil reserves and have many job opportunities. Many Western countries want to build business relationships and want to do trade with Arab countries. So people opt to learn and speak the Arabic language to get better jobs in the Middle East.

The Chinese language has gained more importance because China is making progress by leaps and bounds and it is expected that China will supersede the USA by 2050. Moreover, China is the most populous country in the world and the official language of this populous country is Mandarin which is one of the dialects of the Chinese language. It is estimated that Mandarin Chinese is spoken by a whopping 848 million people.

Do you know Spanish is the second most spoken language in the world? It is spoken by a whopping 329 million people. In the USA, the largest Spanish-speaking community called the Hispanic community resides there. Therefore the USA is the second most Spanish-speaking country after Mexico. Approximately 31 countries around the world speak the Spanish language making it the most spoken language of the world.

Although Asia boasts of the maximum number of languages, they are not necessarily divided that way by country. If we zoom in further on the countries, it becomes evident that many of the popular languages are spoken not just in one, but across multiple countries. That is the reason that English, French, and Arabic are the bosses with a large number of countries where their speakers reside. Take a look at the number of countries and the languages are spoken there.

English is spoken across 101 countries, with Arabic and French being spoken in 60 and 51 countries, respectively. Other languages follow suit with Malaysian and Portuguese having the least number of countries to their name. 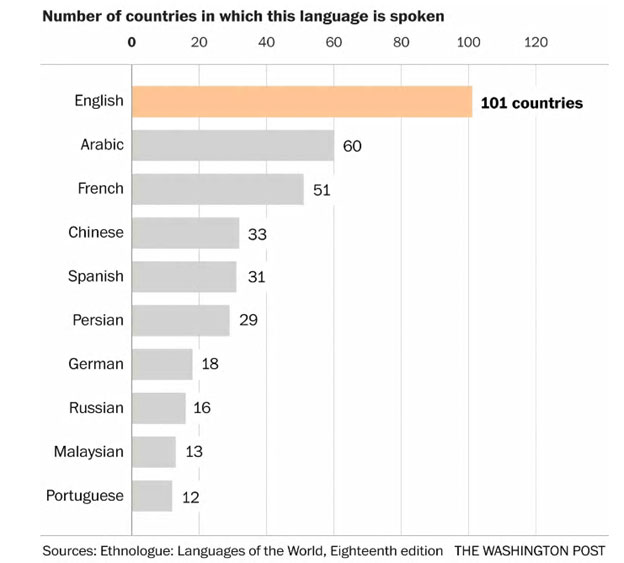 Languages on the Decline!

With every passing day and month, fewer and fewer languages see the light of the day. It is a fact that when a language ceases to be learned, it ceases to survive, and a language dies with the death of the native speakers.

Around a quarter of the world’s languages have less than a few thousand remaining speakers, and there is a general estimate that within the next century, nearly half of the 7102 languages spoken in the world will be endangered or on the verge of extinction. The threat to the languages of the world, therefore, is very real.

How to Save a Dying Language?

The death of a language is not just a loss of the spoken language, it is a loss of culture, traditions, norms, and customs of a community or tribe. With the death of a language, a small unit of civilization ceases to exist, with the customs and traditions of that unit lost and forgotten. When so many languages are endangered and so many of them are already on the verge of extinction, what can be done to preserve them?

Be the first to know about international market insights