We use cookies to ensure you get the best experience on our website. Learn More Got it!

How Many Countries in the World

today we are going to discuss how many countries are in the world.?

Just take an example of animal sacrifices that Muslims do on their Eid. This is considered bad in Hinduism because they worshipped those animals. These cultural and religious nuances resulted in the emergence of new countries

How is Country Defined

The country is the geographic area in which people with the majority can perform their cultural and religious customs without any oppression. They can lead a life as they wanted with freedom. An independent state is a country based on four main factors.

★  The state must devise and abide by the law in the country.

★  A country or a state is a group of people called a population.

★  The state is restricted by geographical boundaries which are not disputed.

★  The country and state are enforced by a legitimate government.

According to the UN, a state is considered a country, if it is a member of five security council members including the United Kingdom, United States, China, Russia, and France. Moreover, the country should have two-thirds of the votes from the General Assembly.

How Many Countries are There in the World?

How many countries are there in the world may seem like a simple question? However, it is very complicated. Counting the number of countries depends upon the source and there is no standard consensus on it. The biggest problem is that different organizations have different criteria to qualify a geographic region as a country.

In practice, the United Nations' point of view is considered important on nationhood. Currently, the UN recognizes 193 countries as member states. It also considers two observer states, the Holy See/Vatican City and Palestine. They are self-ruling states. However, they are not full-fledged countries.

The UN notion about the list of a total number of countries is also prejudiced. This is because the U.N does not recognize the self-governed territory of Taiwan. It was a member of the UN from 1945 to 1971. But it is considered the territory of mainland China.

Just like Taiwan, the UN also does not considers Kosovo a part of Serbia rather than two different nations. Contrary to this, Britannica’s list of countries considers the Vatican, Taiwan, and Kosovo different countries making a total number of 196 countries.

The most confusing country is Greenland. It is a beautiful Iceland between the Arctic oceans and North Atlantic. It is a separate country just like Iceland.  Although Greenland is not a part of the UN. But still, it handles many of its domestic affairs itself. It is politically controlled by Denmark.

One another controversial country is the state of Palestine. Although, it is a constitutional state and is owned by West Bank and Gaza Strip. But it is claimed by Israel.

How Many Countries are in Europe

Look at the Sub-Regions in Europe

To bring the European countries close to each other both in economical and political matters, the European Union came into existence. The European Commission started working in Belgium, Brussels, the European central bank in Frankfurt, Germany, and the European parliament in Strasbourg.  The 9 countries included in Western Europe are as follows:

Let’s have a Look at 9 Countries in Western Europe 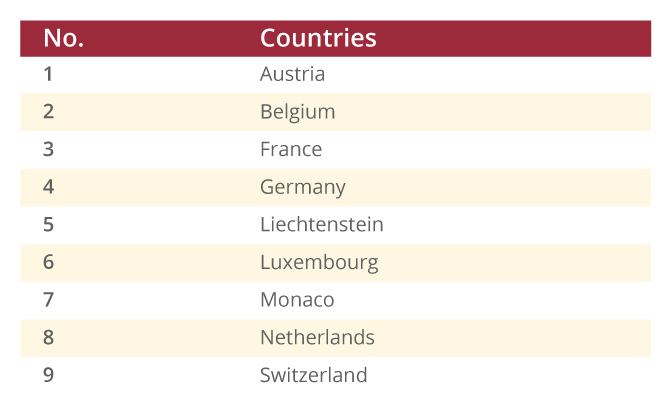 The country with very less population in Europe is Moldova. It is also one of the poorest countries in Europe. Eastern Europe once comes up with Warsaw Pact. It is a military action that is against NATO during the cold war between the United States and the Soviet Union.

Many countries in these regions also support both the NATO and European Union. One important thing to note is that Russia is one of Europe’s transcontinental countries. This is because the Ural Mountains are a part of Asia.

Let’s have a Look at 10 Countries in Eastern Europe 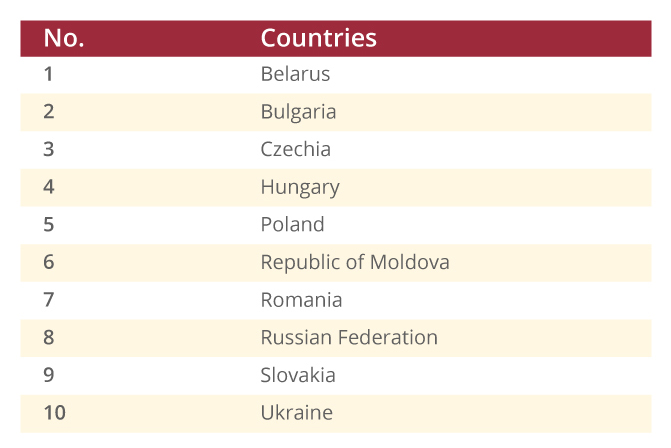 The least populated country in this region is Iceland with a population of only 360,000 residents. The countries included in Northern Europe are:

Let’s have a Look at 10 Countries in Northern Europe 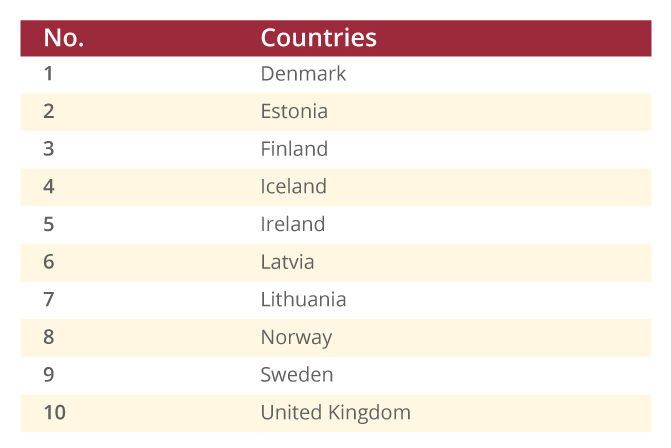 Let’s have a Look at 15 Countries in Southern Europe 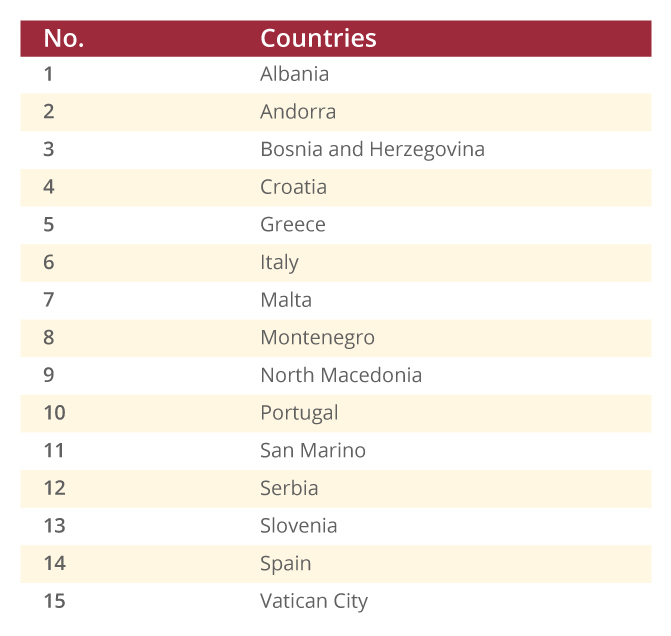 How Many Countries Are in Africa

On the contract, St. Helena, which is the British dependency is the least populated area in Africa. The United Nations has divided Africa into five subregions which are Northern Eastern and Western and Southern Africa. The borders of African countries resulted from former European colonial powers that do not reflect religious, linguistic, or religious nuances.

There are 5 Regions in Africa

The important thing to note is that all the countries that are included in Northern Africa include both Muslim and Arab countries. The majority of Northern African countries follow the religion of Islam and speak the Arabic language. Cairo is the Egyptian capital with a population of more than 20 million.

The Countries Included in North Africa are:

Eastern Africa consists of 453 million people which are living in 20 countries. The most populous country in this region is Ethiopia with a population of 115 million. On the contrary, the less populated country in Eastern Africa is an island country called Seychelles.

It is located on the East coast of Eastern Africa and only 98 thousand people live there. The continent of Africa is very diverse with a variety of different ethnic and linguistic groups. People living in Eastern Africa follow Islam and Christianity however few parts of the population also follow traditional African religions.

The largest city in Eastern Africa is Nairobi. It is the capital of Kenya with a population of approximately 6.5 million people.

Let’s have a Look at the Countries of Eastern Africa 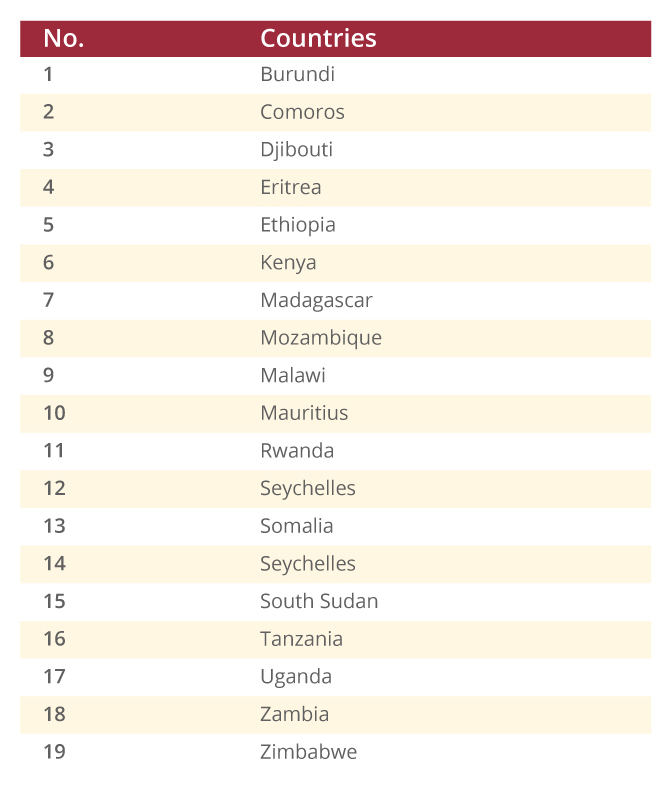 Islam is the most prevalent religion on the Northern side, whereas Christianity is the dominant religion in the South. Western Africa depicts the rich culture of Ghana and Mali. At present, they have become the names of two subregions countries.

The Countries Included in Western Africa are: 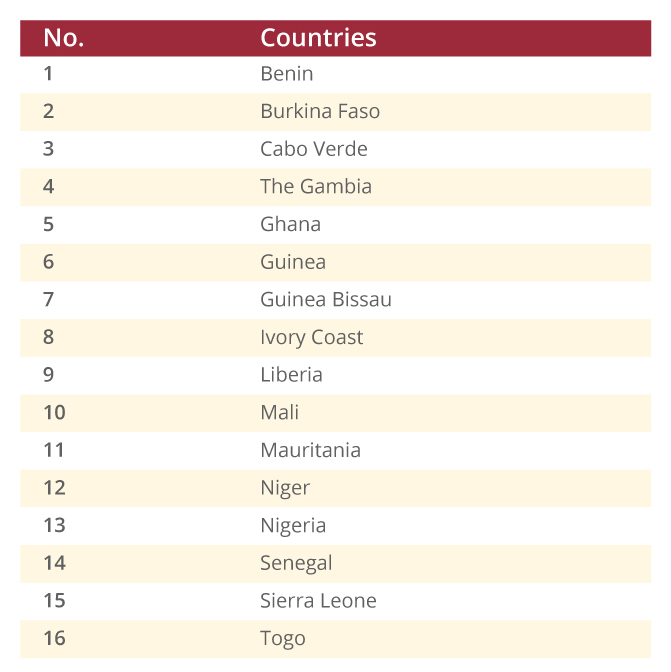 They are located in Middle Africa’s West coats and it is the inhabitant of 219 thousand people. The biggest city in this region is the capital of DR Congo, Kinshasa. Approximately, 31.3 million people reside there. Moreover, it is considered the third largest populous city in Africa.

The fourth largest city in Middle Africa is Luanda. It is the capital of Angola. Middle Africa is not considered a safe area to live because of certain conflicts. Rwanda is a subregion country where genocide attacks were witnessed when the Hutu majority leader slaughtered around one million people of the Tutsi minority.

In addition to it, conflicts between political and ethnic groups have made this region unstable. 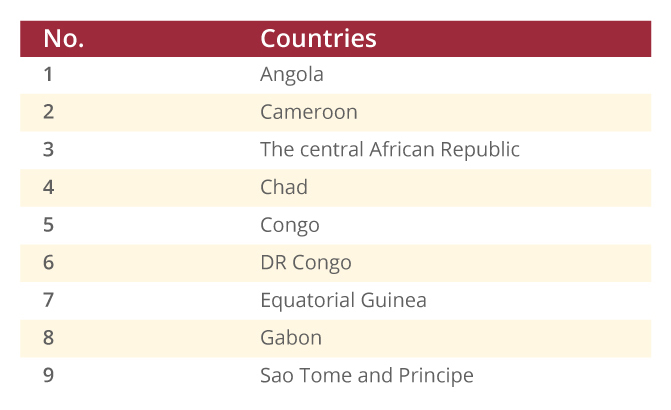 The raciest system in Southern Africa ended in the 1990s. It resulted in the emergence of multiracial democracy that makes the subregion comparatively stable as compared to other African subregions. However, some parts of the African subregions still face conflicts and economic instability.

The 5 Countries of Southern Africa are:

How Many Countries Are in Asia

Asia is one of the largest and most populated continents of the world. This continent comprises 48 countries with three other territories. This number also includes transcontinental territories that lie mainly in Asia. You will be amazed to know that 75% of its territory is present in Asia.

However, only 22% of its population resides in this part. If Russia is included in the list of Asian countries, then the number becomes 49 from 48. The United Nations have divided Asia into different sub-regions.

Let’s have a look at These Sub-Regions.

The subregion of Eastern Asia has a population of 1.7 billion. It consists of 5 countries with one of the giant country which is China. The Chinese population is estimated to be around 1.4 billion. The less populated country in the area is Mongolia with a population of 3.29 million.

Two Eastern European countries China and Japan are the second and third largest economies in the world. It is expected that China will be the world’s largest economy by 2028 and it will surpass the United States.

There are also some isolated countries present in Eastern Asia. One such country is North Korea with stagnant growth. The other Eastern Asian countries like Japan and South Korea along with North Korea are looked upon with suspicion because they have nuclear weapons. The most populated city in this region is Tokyo with a population of 38.2 million people followed by Shanghai and Beijing with a population of more than 20 million.

The 5 Countries Included in Eastern Asia are

There are 11 countries Situated in South-Eastern Asia with a rough population of 673 million. One of the largest and most populous countries in this region is Indonesia. This country comprises many islands having a population of 273.5 million.

Some other countries located in this region are Thailand, Cambodia, and Myanmar. The less populated country in South-Eastern Asia is Brunei. You will be amazed to know that its population is not less than 437 thousand people.

The most populated country in this region is Manila, the capital of the Philippines with a population of 13.3 million. The other countries that lie in South-Eastern Asian cities are Thailand, Indonesia, Bangkok, and Jakarta.

Let’s have a look at the Countries of South-Eastern Asia: 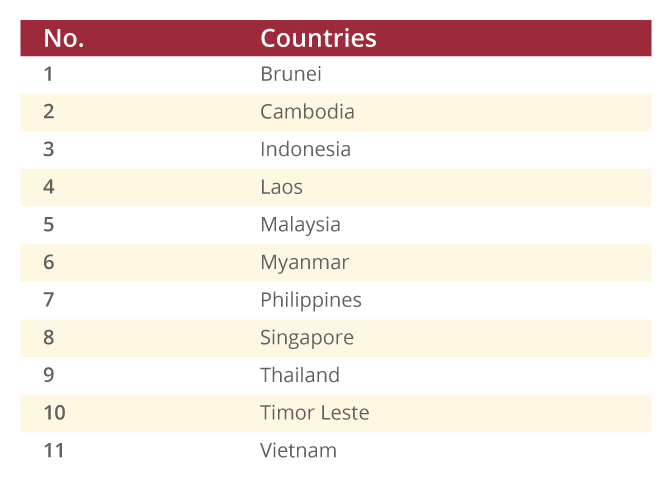 Do you know that there are 9 countries situated in Southern Asia? Around 2 billion people are inhabitants of these countries. More than half of the population of Southern Asia resides in India. Therefore, it is the world’s second most populous country. According to the rough estimate, India will surpass China in 2027.

The most populated city is Mumbai with a population of 21.6 million people. The other populated cities are Dhaka and Karachi in Bangladesh and Pakistan.

Let’s have a look at the Countries of Southern Asia: 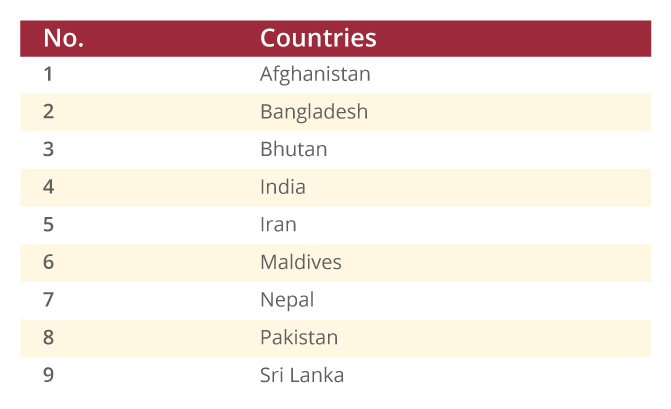 The country with less population is Turkmenistan with a population of 6 million. There is one transcontinental country present in this region called Kazakhstan. To your surprise, it is also the largest country in the region.

Let’s have a look at the Countries of Central Asia:

This region is an inhabitant of 282 million people. One of the most populated countries in this region is Turkey. Around 84 million people reside in this country. Turkey is considered a transcontinental country because half of its part is present in Europe and half in Asia.

Few other transcontinental countries present in Western Asia are Azerbaijan and Georgia. However, the majority of their population resides in Asia. Cyprus is the least populated country in Western Asia. Only 1.2 million people reside in this country. Due to some technicities,

Cyrus is considered a part of Europe because of political and cultural nuances. Moreover, it is also a part of the European Union. Iraq's capital Baghdad is the most populous city in Western Asia with a population of 8.7 million. The other main population hubs in the region are the Turkish capital, Ankara, and the Saudi capital, Riyadh.

Let’s have a look at the Countries of Western Asia: 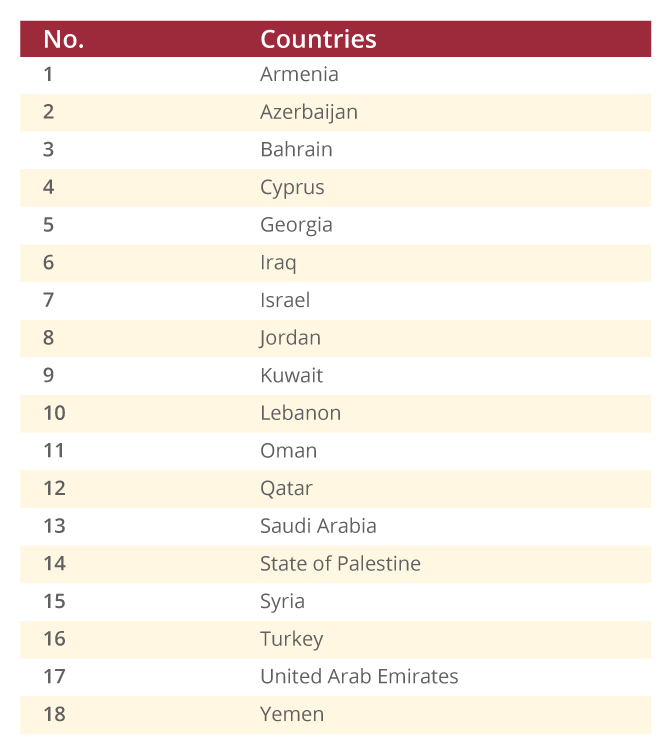 Which part of the world, do you like the most? In every region of the world, different languages are spoken. Therefore, if you want to explore the different cultures and countries of the world then you should take the assistance of professional translation services.

Do you know how many countries are there in Oceania? Click on the following link and find out. https://www.marstranslation.com/blog/how-many-countries-are-there-in-oceania/

It may sound funny and shocking, but there are countries that are ranked by happiness. If you want to learn about the 10 happiest countries in the world,

Be the first to know about international market insights